Questions are growing over the role played by Latvia’s Trasta Komercbanka in controversial Ukrainian state tenders in 2011 allegedly involving the embezzlement of hundreds of millions of dollars. According to bne enquiries and the tender documents viewed by bne, companies participating in the tenders were mere creatures of the Latvian bank, which has links to Ukrainian Minister of Energy Yury Boiko.

As bne previously reported, in March 2011 a UK shell company called Highway Investment Processing won a tender to supply a drilling rig for $400m to Chornomornaftogaz, which is a fully-owned subsidiary of national gas company Naftogaz Ukrainy. Norway’s offshore drilling giant Seadrill later confirmed that it originally supplied the rig to Highway but for only $248.5m, raising questions about the size of the intermediary’s mark-up, and who was the lucky beneficial owner of Highway.

In two parallel tenders in March 2011, a UK shell company registered at the same address as Highway Investment, Verylux Company, also with unknown beneficiaries, won contracts totalling over $150m to provide supply ships to the same Naftogaz subsidiary Chornomornaftogaz. Market analysts pointed to nearly 100% mark-ups for those deals. Naftogaz has disputed any irregularities in the tenders.

Adding to suspicions that the Naftogaz tenders were rigged, journalist investigations and tender documents show that all shell companies involved in the tenders – both winners and losers – had been set up by the same company service provider, International Overseas Services (IOS). A Ukrainian court, approving a police request to search IOS Kyiv offices in September 2011 in connection with a different money-laundering case, noted that IOS: “specializes in creating offshore companies registered under fictive persons for the purpose of tax minimization and transferring funds to offshore banks.”

According to the investigation cited, IOS is run for and by Latvia’s boutique banks – banks that mainly service clients from the former Soviet countries incorporated as offshore companies in the West. Thus, it was no surprise to discover that the winning company in the $400m tender for the drilling rig, Highway Investment, has its bank account at Latvia’s Trasta Komercbanka, the country’s 12th largest by assets, according to the tender documents and ensuing contract as seen by bne.

Remarkably, or perhaps not, the tender documents that have viewed by bne showed not only that the winner (Highway Investment) in the drilling rig tender had its bank account at Trasta Komercbanka, but that the runner-up in the same tender (New Zealand-registered Falcona Systems) also had a bank account at Trasta Komercbanka. Falcona was runner-up in a parallel tender for supply vessels as well. Ukrainian legislation requires a minimum of two bidders.

bne’s examination of the tender documents shows that Trasta Komercbanka’s involvement runs even deeper. The Falcona Systems tender documents specify that power of attorney over the company was held by a certain Raisa Mykolaivna Dziuba, with passport details provided. bne located and talked to Dziuba, who confirmed her passport details. But far from being an energy industry executive, Dziuba is a real estate agent in Kyiv employed by a minor player AESI International Development. She is currently trying to sell an office and parking space in the downtown “Diplomat Hall” development, as well as a suburban detached villa.

bne established independently one other company for which Dziuba apparently holds power of attorney: Panama-registered Fondberg Trading Inc. The company is listed on the website of a Kyiv travel agent Magic Travel as its “foreign partner”, with Dziuba as its director, and a bank account at Trasta Komercbanka. Dziuba said she had never heard of the company and had nothing to do with the tourism branch – except for frequent trips to Riga.

The findings may point to Dziuba’s power of attorney for Falcona Systems being fictive and organized by Trasta Komercbanka, which suggests that Falcona Systems is a creature of the bank itself.

The ultimate beneficiaries of companies that have nominee directors and shareholders, such as Highway Investment and Falcona, exercise ownership through their power of attorney. This document is crucial for banks and counterparties to establish the real beneficiaries of a company in order to comply with know-your-customer legislation. A fictive power of attorney is thus often a sign of foul play afoot. “Of course it is an illegal action,” Anna Dravniece, adviser to the chairman of Latvia’s Financial and Capital Market Commission, tells bne, referring to the creation of a fictive power of attorney. Even if it was solely the company’s initiative – doubtful in this case – the bank is obligated under anti-money laundering legislation to verify the data provided by customers, according to Dravniece.

The apparent inclusion of a fictive power of attorney in the Falcona tender documents could put into question the results of the tender in Ukraine – and all the more if the power of attorney specified for the $400m winning company, Highway Investment, was also shown to be fictive.

According to the tender documents, power of attorney for Highway Investment was held by a certain Pavel Dvulichanskii. None of the contracting parties with Highway Investment questioned by bne have ever reported dealings with anyone of that name. Lacking passport details, bne was not able to establish the identity of Dvulichanksii, who has no public profile, despite being technically responsible for deals measuring hundreds of millions of dollars.

Trasta Komercbanka said it could not comment on clients’ arrangements, but assured that the bank played no part in the Naftogaz tenders and connected deals. Highway Investment could not be reached under their advertised telephone number.

Trasta Komercbanka’s role in the controversial Chornomornaftogaz tenders is sensitive not just because of questions raised about the bank’s probity, but because of the strong links between Trasta Komercbanka and Ukraine’s energy minister, Yury Boiko, who masterminded the Naftogaz 2011 spending spree.

According to the Trasta Komercbanka website, owner of 43.2% of the bank and chairman of the board is Igors Buimisters, a native of the Ukrainian city of Kharkiv. According to his resume, Buimisters in the first half of the last decade worked in Ukraine as consultant to the management of Naftogaz, which was headed at that time by none other than Yury Boiko.

British citizen Charles Treherne, who holds a 9.3% stake in Trasta Komercbanka, according to the bank’s website, and sits on the supervisory board, also has links to energy minister Boiko via Ukrainian gas oligarch Dmitro Firtash. Treherne was deputy chairman of the supervisory board of Firtash’s Vienna-registered Centragas AG. Centragas is the ownership vehicle for Firtash’ 45% stake in the scandal-tainted gas trader Rosukrenergo.

The cosy Rosukrenergo arrangement ended as a result of the January 2009 gas agreements between Naftogaz and Russia’s Gazprom, for which former prime minister Yulia Tymoshenko is currently serving a seven-year jail sentence for signing.

Ivan Fursin, with 5% in Rosukrenergo Firtash’s junior partner, has a 20-33% stake in Trasta Komercbanka, according to information at the Latvian financial regulator’s website.

Trasta Komercbanka’s links to Boiko, combined with its involvement in the controversial March 2011 Naftogaz tenders he masterminded, where journalists and opposition allege that over $200m went missing, reflect badly on the energy minister. But while questions have been raised in Ukraine over the conduct of the tenders, given the current constellation of power in Ukraine no law enforcement action is likely.

In Latvia, however, question marks continue to accumulate around Trasta Komercbanka. Apart from its involvement with the controversial Naftogaz tenders, at least two other cases raised eyebrows last year. In September 2011, asset retrieval proceedings by Kazakhstan’s BTA bank against its former owner Mukhtar Ablyazov at the High Court of London found that Ablyazov had diverted $1.5bn of BTA assets via offshore companies to accounts at Trasta Komercbanka, with a Belarusian farmer holding an apparently fictive power of attorney for the offshores involved. And a Ukrainian court in September 2011 found a small Dnipropetrovsk bank had shifted a total of $2bn out of the country via IOS-established companies to accounts at Trasta Komercbanka. “The bank controls all clients operations carefully in compliance with Anti Money Laundering Law. If the bank suspects or finds out that a client acts unlawfully, according to the law it notifies the national authority,” Trasta Komercbanka assured bne.

Latvia’s banking sector is still reeling from the 2011 collapse amid hundreds of millions of missing euros of the country’s 9th largest bank, Latvijas Krajbanka, and its Lithuanian parent bank Snoras, as a result of allegedly illegal activities of its owner Vladimir Antonov. The Krajbanka debacle raised urgent questions about whether Latvia’s regulators are up to the job of handling Russian and Ukrainian oligarchs’ shenanigans. Latvia can ill-afford a repeat performance.

The author of the article, Graham Stuck, worked together with Re:Baltica on the “Dirty Money” project. His article about Trasta Komerbanka is republished with permision from Business New Europe.
You can read the original article here – Latvian bank’s role in controversial Ukraine tenders under scrutiny 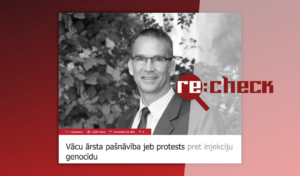 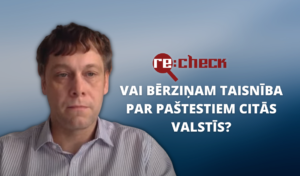